Happy Thanksgiving, foodies! A special Thanksgiving edition: if you are seafood lover, maybe you often enjoy lobsters, but have you tried the lobsters cooked in the Cantonese way?
Here is the Steamed Twin Lobsters we ordered at East Chinatown Restaurant, located at 415 Hancock, Quincy, MA 02171. Fresh lobsters are steamed perfectly with minced garlic and scallion on top, and silk noodle under. I specially love the silk noodle, which is smooth and juicy because it absorbs the essence from the lobsters. Yum!
Another seafood dish we tried was Sautéed Sliced Sea Whelks with Chinese chives. The sea whelks are sliced to the right thickness, not too thin and not too thick.  The sliced sea whelks tasted fresh and crunchy. Love it!
Posted by Christine Li at 9:36 PM 9 comments:

Craving for yummy bubble tea but no good place around? Try this easy 6 steps for your own tasty homemade bubble tea!
Ingredients: Lipton black tea bag, soymilk, Tapioca Pearl (bubble, I bought mine from Super 88 in Allston), honey
Step 1: put bubble （as many as you like） into boiling water for 5 minutes
Step 2: take bubble out and put them into cold water for 10 seconds
Step 3: take bubble out and put then into honey for 1 min
Step 4: pour boiling water over a tea bag, and brew for 3 mins
Step 5: put soymilk into tea (soymilk:tea=1:3)
Step 6: put bubble into milk tea in Step 5, and sweeten to taste
Enjoy your homemade yummy bubble tea :)
Posted by Christine Li at 9:44 PM 3 comments:

Recently, I’ve been addicted to making all kinds of Cantonese soup in the same way my mom cooks for the whole family, and it makes me feel home :)
Today, let’s make anther traditional Cantonese soup—American Ginseng Chicken Soup.
Ingredients: chicken (around two pound, you could either buy a whole chicken or just chicken drumsticks), one bag of American Ginseng mixed Chinese herbs (which you can find at any Chinese supermarket, please see the picture below), salt

Cooker: a pot that can hold at least one gallon of water (around 8-10 bowls of water)
Step 1: cut chicken into chunks (if you use only chicken drumsticks, you don’t have to cut them, which is easier)
Step 2: boil one gallon of water in the pot
Step 3: put the cut chicken into the boiling water for 5 mins
Step 4: take chicken out of boiling water, get rid of chicken skin, and wash them with cold water (it makes sure that the meat is as less fat as possible, so the broth is clear and non-oily)

Step 5: wash the American Ginseng mixed Chinese herbs
Step 6: boil another gallon of water in the pot
Step 7: put the washed herbs and chicken into boiling water
Step 8: turn down the cooking heat to slow till the water is boiling again
Step 9: slow cook the soup for an hour and a half
Step 10: add salt according your personal preference, and then the soup is ready to serve!

Cantonese cuisine is famous for its slow-cooked soup (called lo foh tong in Cantonese dialect). The Cantonese soup is a clear, non-oily and non-greasy broth, simmering with Chinese herbs and meat. It is a must-have dish at a traditional Cantonese family dinner, because people in Canton believe that the slow-cooked soup is good for their health.
I haven’t found any real authentic Cantonese soup at any restaurant in Boston so far, so let’s homemade one of the most famous traditional slow-cooked soups--Ching Po Leung, with only 10 simple and easy steps!
Ingredients: two pound of pork chop, one bag of Ching Po Leung (which is a mix of Chinese herbs that you can find at any Chinese supermarket), salt
Cooker: a pot that can hold at least half a gallon water (around 8-10 bowls of water)
Step 1: cut pork chop into chunks
Step 2: boil one gallon of water in the pot
Step 3: put the cut pork into the boiling water for 5 mins
Step 4: take pork chop out of boiling water, and wash them with cold water (it helps to wash off the fat of pork chop, so the broth is clear and non-oily)
Step 5: wash the Ching Po Leung with cold water.
Step 6: put the washed Ching Po Leung and pork chop and half a gallon water into the pot
Step 7: boil the water, and then turn down the cooking heat to slow till the water is boiling
Step 8: slow cook the soup for an hour and a half
Step 9: add salt according your personal preference, and then the soup is ready to serve!
Enjoy your homemade delicious and healthy Ching Po Leung soup :)
Posted by Christine Li at 5:45 PM 4 comments:

Besides Pho (Vietnamese noodle soup), Le’s Restaurant has the BEST summer rolls I’ve ever tasted in Allston!
Fresh Summer Rolls (GOI CUON in Vietnamese) have fresh and nutritious ingredients like “shredded lettuce, mint and rice vermicelli”, and you can choose either “sliced pork, shrimp” or “a traditional combination of sliced pork and shrimp”.
All the ingredients are wrapped into “a softened rice paper”, which is so delicately made that you can see the ingredients through the rice paper. The low-fat rolls taste so fresh and flavorful, with peanut dipping sauce.
Fresh summer rolls also have vegetarian options, served with tofu.
Posted by Christine Li at 4:37 PM 2 comments:

Foodies in Allston, if you are a fan of Vietnamese/Asian cuisine, you don't wanna miss Le’s Restaurant, which is my favorite Vietnamese restaurant in Allston. It is so great that I have to introduce it to you, although this blog is supposed to be about Chinese food… However, many Vietnamese actually speak Cantonese, because their ancestors were from Canton, which makes me feel home. Also, the Chinese concept of yin and yang—the balance of complementary opposites—has contributed to Vietnamese cuisine.
Le’s Restaurant, located at 137 Brighton Ave, Allston MA02134, has the best Pho (Vietnamese noodle soup), and summer rolls I’ve ever tasted in Allston! The atmosphere is super nice, services are great and the people there are friendly!
Pho, which is “SPECIAL (DAC BIET)” on their menu, is their “most popular beef noodle soup combining sliced rare eye round, well done brisket, flank, tendon and tripe”. The Pho also has scallions, onions and cilantro, but you could tell your waiter/waitress that you want your Pho without them when you order.
They serve the soup with “a plate of bean sprouts, fresh basil, sliced lime and green chili pepper on the side.” You can add some or all of them into the soup according to your personal preference. Personally, I like to put a little bit of everything into the broth, and wait for around 30 seconds to let the broth absorb the essence of the herbs.
Traditionally, Vietnamese have a special way to eat the meat in the soup. They combine the sweet & sour sauce (the black sauce on the table) and spicy sauce (the red sauce on the table) at the proportion of 2:1, and dip the meat into the mixed sauce to make a more authentic flavor. The broth is clear, flavorful, and not oily at all, with smooth noodle and tender meat. BEST Pho ever! 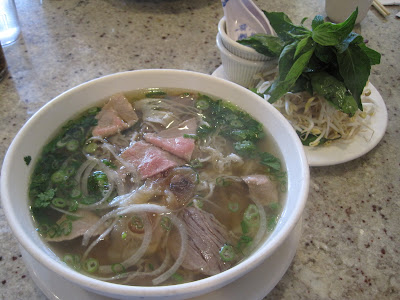 They also serve the BEST summer roll, which I’ll talk about in the next post. So stay tune :)
Posted by Christine Li at 3:28 PM 3 comments:

BEST chicken I’ve tasted in Boston ever!
This post is gonna be about my favorite chicken dish—Empress Salted Chicken! Even the name of the dish sounds so awesome: the chicken delicately prepared only for the powerful empress in ancient China, the mysterious land in the Far East. We can now all taste this dish at Ho Yeun Ting in Chinatown, located at 13 Hudson St., Boston, MA 02111.
The restaurant is really not that flashy nor spacious, but the chicken is so good that I don’t really care about the simple decoration and limited capacity at all! The chicken is so perfectly cooked and salted that it is tender and juicy from outside to inside, and even you can taste its special salty flavor from the bones. So Yum! Also, they do take out, and you can either order half or the whole Empress Salted Chicken! I just looove saying the name :)
Posted by Christine Li at 10:39 PM 4 comments: